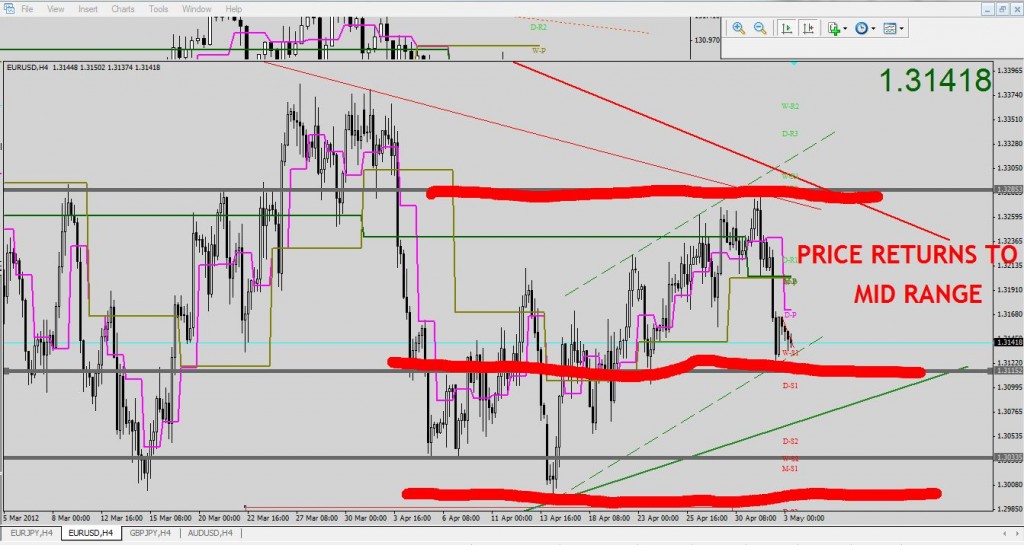 G’day Surfers – nothing like some bad news data to get things moving, what!

They decided 4 Doji’s on the trot was more than the market could tolerate. Bad Unemployment & PMI numbers combined with ongoing pressure to drive EUR/USD directly to our major support level of 1.3115. Clearly the Bulls ran out of steam just as they could taste my month long target of 1.3285. I have been asking price action to pullback to get a good run at that major resistance level but they may have run clean out of the stadium!! Whilst the crash was swift and decisive it has merely served to return the market to the middle of this long term consolidation range. We had a good line in place to catch the move but they went without giving us a tradeable signal – that’s trading and we simply move to the next setup.

The higher lows sequence has now been broken and pivots are sending bearish signals with Daily crossing the glued together Weekly and Monthly. Daily Pivot is untested and the market has been cooling it’s heels, after rebounding 25% off yesterday’s fall. Call me a glass half full guy but I’m not seeing sufficient evidence in the charts to write the EURO off just yet. I simply see the market compressed between major support and resistance lines and still looking for the strength to lift or the weakness to fall. Slow, tentative gains continue to fall victim to the constant barage of bad economic data spewing spasmodically as if volcanic lava. I think that’s technical talk for “it’s a bit messy”.

I’m bowing to fundamentals today with BIG news out this afternoon. That combined with yesterday’s crash lead me to believe we will see a quiet morning as the market consolidates and prepares for the later announcements. It’s been a crazy week so I’ll be prepared for anything and whilst my cue is in it’s case, I haven’t yet placed it in the rack. It’s pretty clear that we only have a support line to play with and you’ll be surprised to learn (NOT) that my Play of the Day would be to trade a false breakout of this line long testing Daily Pivot. The trade would be countertrend in NFP week so very small stake. Should it materialise however, a double bottom would be formed so it’s not so silly!  Until they make an intraday trendline for us, it’s our only Hotspot.

Have a great weekend everyone.