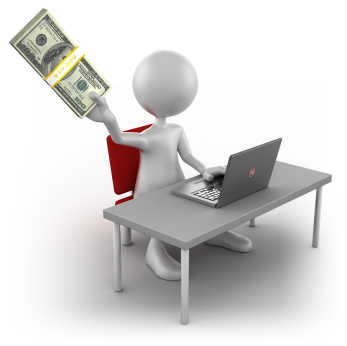 The concept behind Forex trading is pretty simple:

1) you exchange one currency against another;

3) you exchange currencies back and make a profit.

However, the problem lies within the market fluctuations…

How can you make sure the market goes into your direction? How do successful traders predict the markets movements to make money?

Well, the truth is, they can’t predict the market. No one does.

That being said, they have built a trading system they strictly follow. More importantly, their system has a positive expectancy.

The expectancy of a system is the amount you make (or lose), per unit invested, on the long haul.

This is how you consistently make money trading Forex: by building a system with positive expectancy.

Of course, every now and then, they lose (they have to give back a greater sum than invested to the winner).

But they are built with a positive expectancy: on the long haul, they ALWAYS make more money than they lose.

So, if you want to make money trading Forex, you simply got to become the casino and not the gambler…

By following your system, you know the odds are in your favor.

Of course, every now and then, you will still lose money.

But because your gains are more important than your losses, over the long haul, you consistently increase the size of your account.

The next logical question would therefore be…

How do I build my positive expectancy system?

Interestingly enough, this is not too difficult. I have seen people trading successfully by simply using a “system” based on a moving average.

The real difficulty is to be able to strictly follow your system! As always, the weaker part of the equation is the human psyche.

The real question therefore is: How can I strictly follow my system?

And the answer is: You need to focus on the process.

Which brings us to the answer to the initial question: To make money trading currency, you should NOT focus on the money you make.

Do you think traders who are handling huge accounts (several millions) remind themselves how much they are risking every time they are taking a trade?

If they did so, they wouldn’t live longer.

Instead, they focus on the process, they strictly follow the rules of their system and don’t deviate from it.

Once they enter the trade, they already know how they will react to ANY market fluctuations. They follow the system’s rules.

Do they sometimes lose?

Oh yeah. I have seen very profitable systems losing about 90% of the time.

Are they focusing on the process?

Imagine using that kind of system. You better be mentally focused on your system because you are “on average” losing 9 times out of ten.

You can’t get excited if you win 3 times in a row. It’s statistically normal.

You can’t get stressed out if you lose 33 times in a row. It’s statistically normal.

You have to stay focus.

So what should you do?

Act like a professional trader from now on. Don’t try to “predict” the market. Start looking at the big picture and build a long-term winning system.

Focus on your system and its expectancy. Focus on the process only. Strictly avoid deviating from your system.

That’s the beauty (and the curse) of Forex trading.