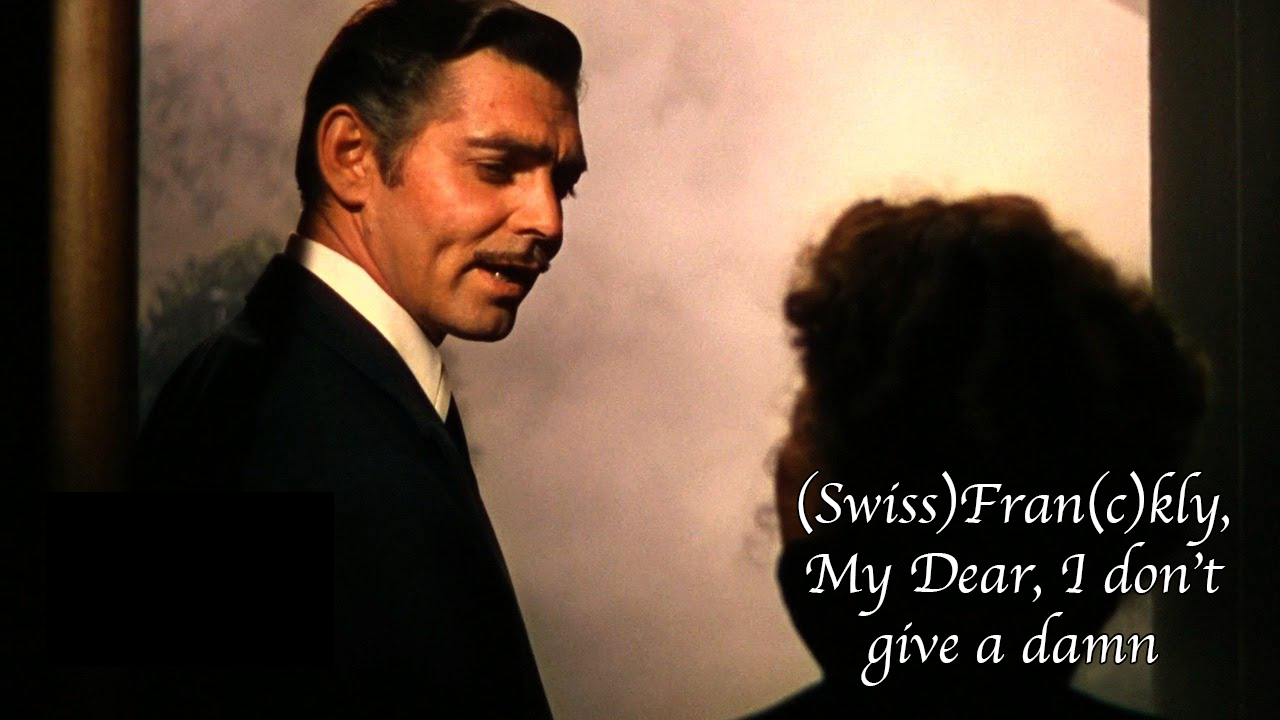 Traders, brokers and banks all over the world went into a panic on Thursday 15/01, after the Swiss Central Bank moved interbank rates to a negative level (-0,75%) and announced that the Maginot Line would no longer defend the Euro against the Swiss Franc at the rate of 1.2 Swiss Francs per Euro. The Swiss Central Bank decided to collapse the value of the Euro to a minimum of 0.85 and allow it to move around the playing field. These decisions by the Swiss Central Bank were like a real earthquake which involved the Forex currency as a whole, causing losses amounting to around one billion dollars. These losses increase by the hour. January 15th will be remembered as Black Thursday.

We failed three times, because after what happened on January 15, 2015, many traders lost money and reset accounts. These traders could not see any more money because their broker failed. We failed, because we did not convince you or explain to you well enough how to protect your capital.

Frankly, we shouldn’t give a damn, because here in SurfingThePips nobody has invested anything. In fact, the week is over, we have made a profit as usual, but we feel a little guilty anyway.

We failed, because we have not quite convinced traders not to trade illiquid markets!

That is just a fly, a gust of wind, the beating of wings to create a “disaster”. The proof is what happened on January 15th. The SBN – Swiss Central Bank (which is not exactly a fly), had already done something historically significant in December. It was also unprecedented. The interests at Interbank became negative, -0.25 %.

This constituted a critical alarm bell that should have alerted any trader. There were also many brokers who, even in previous months (see Dukascopy October 13, 2014 ), understood the situation, asking its customers for more margins or to suspend trading on the CHF.

A real trader knows that when there are events, situations, already lived, trading is nice and profitable.  In fact, a trader makes operations based on patterns of the market, or situations that are repeated frequently and that lead to certain results. A negative rate is not a usual situation. Unless you want to make bets on it, it is a situation that should be avoided .

For these reasons, we pay compliments to those who have earned money even in this situation. But we would like to ask them, have you calculated all of the risks? Do you know that these types of market spikes hunting stops are on the agenda? Do you know that in the absence of liquidity there may be an enlargement of spreads that can halt to a stop even if you’re right? How many times can you do well?

We failed, because we have not quite convinced traders to have a low risk and accurate management.

Events such as those of January 15th show how risk management and accurate low risk is essential to survive almost unpredictable events. When we are told that we risk too little and perform low compared to others, we always talk about the long term. Now the proof is in front of everyone’s eyes!

There are many who have lost everything, entire capital gains of years. A single event. An event as “rare” as the tsunami in Japan, the oil crisis, the Ruble crisis, the American housing bubble, The failure of Argentina, the failure of Lehman Brothers, the exit of Greece from Europe(?).

Rare events…bullshit! They are more frequent than is perceived, the facts speak for themselves! Events affecting financial markets, including currency. A true method also considers these events and implements a range of protections that would never allow anyone’s business to be greatly affected by these events. Do not be conceited, but act with the wisdom of a family man. Do not be the fire that burns beautifully and turns off permanently. Be slow but inexorable, be like water that digs the hardest rock drop by drop. 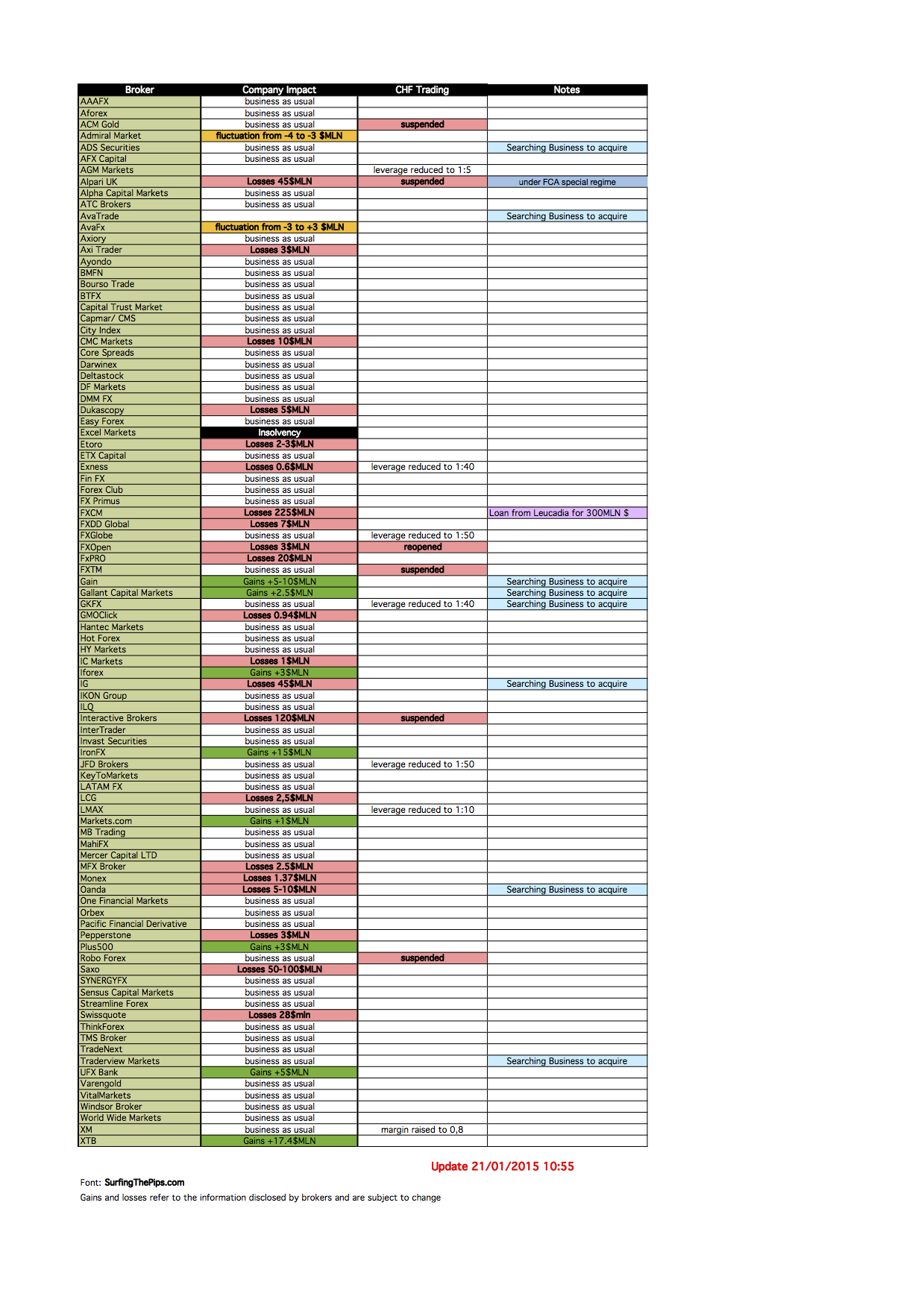 We have failed at adequately informing you of how Brokers work.

How many brokers will fail in the next few days, because of unpredictable losses? Alpari, one of the most famous brokers, declared insolvency, but you do not worry, your funds are safe, since your account is segregated. FXCM, publicly traded on the New York Stock Exchanges (the shares lost 90 % on its opening on Wall Street on January 16th , 2015) is one of the brokers that many sites advised, because it is reliable. Instead, we at SurfingThePips have never recommended it, even privately (because of the multiple fines that have been received by the control American financial NFA). FXCM suffered a loss of 227 million nominal dollars (although it could still recover debts from customers). Even in this case, since the customers’ accounts are segregated, should failure and default occur, the customers’ money will be safe and all customers will review their deposits. Hoping that there are no skeletons in the closet. We can’t know if there are any and we hope that there are none. What amazes us is the ease with which industry experts addressing the topic of brokers, never bother to investigate what really happens behind the scenes of each financial company.

Think about whether certain things can happen to brokers who are more or less popular and famous, such as those mentioned above. What can happen to many other brokers located in nations that are more or less well- identified , without supervisory bodies and that are efficient without segregated accounts obligation. Unbridled marketing  blinds everyone, professionals and non-professionals, as they have the desire to make money , even at the expense of the right strength and long-term prospects .

Unbridled marketing, high leverage, superficial risk management, the broker , its exhibitions and its customers , leave no escape to neither the trader nor the broker.

We will be tough. If you have lost money, you’ve deserved it.

Many respected colleagues will probably tell you that you can earn money with these situations, they have earned money. The more the market moves, the more opportunities there are. We have always told you the truth, and we want to keep telling you the truth. First you have to think of the opportunities to protect you from the risks, just so you avoid hurting yourself . You have to figure it out right away, NOW! Selling a few more courses and bragging are not important. But make sure to make yourself fully aware and independent in your analysis and operation, without shackles around your head.

You were rough, you have not followed wise advice, you were blinded by easy money and you had to learn your lesson! This is the pure reality! Trading is a serious business, not a game, it is not fun; it is a means to an awareness of your own shortcomings and it can make you achieve wealth, but it should be dealt with seriousness, with precision, with dedication,with caution, with patience. Even the activity of coaches is a serious business. A coach should not only transmit knowledge, but must help their student to think, to take responsibility and learn from their mistakes. Do we have to become harsher with you?

We feel a little guilty, because we could not do enough for all of you and for all those who do not know us. Our mission is important, because it brings balance in choice and accountability without superficiality, but we need your help in order to improve, we need your support, your advice, your doubts , questions and criticisms. Only then can we reach more people and save them from approximate and little noticed trading, that always leads to inevitable ruin.

We promise to improve and make sure that each of you learns the lesson without necessarily losing money. In exchange, we humbly ask you to have faith in our recommendations and verify their robustness yourself. As mad,as bad, as you might seem, continue to endure shocks of all kinds year after year.

To the next wave